The Kings Park in Stirling is fortunate to have several organisations committed to the upkeep and improvement of the park as a physical amenity, and as a place that is welcoming and accessible to all. It is perhaps because of this that it has been nominated at Scotland’s first dementia friendly public park.

Curious about what makes a park ‘dementia friendly’ several OCN participants took a trip to the park (on 20th June 2019) to see what they thought. Two groups of participants accompanied by volunteers made their way around two prescribed walking routes, engaging in conversation about what they encountered, and answering questions from the ‘Public Outdoor Environments‘ assessment tool.

After the walk around, the groups discussed and recorded their findings further over coffee in the Pavilion Cafe, in newly refurbished tennis pavilion. Whilst on a roll some of the more enthusiastic participants also evaluated the Cafe itself using the ‘Public Indoor Environments‘ assessment tool.

Detailed reports of the findings of the visit will be available to various organisations interested in improving the Kings Park. It is anticipated that the findings can help in the design of future park improvements. 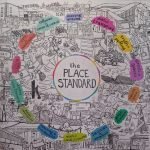