Our series of digital connections – relaxed library events concluded last week. The first at Central was not well attended, but given that it was an afternoon slot on a cold, wet and grey day this is perhaps not surprising. We had OCN volunteer community researcher Janet Wood and OCN participant and activist Vibeke Wylder join us with our new OCN mascot Rufus. We also spoke to two gentlemen who were passing through who gave lots of suggestions for apps to help with memory. (See previous update).

St Ninians saw participation from the local reminiscence group (who meet once a month at the library) and members of the public who saw the poster. Attendance was definitely helped by the strong support of the learning officer (Barbara), who enthusiastically promoted the event. Unfortunately a group from Fairview Care Home could not make it. The session focused heavily on reminiscence and on the subject of creating and sharing playlists using Spotify. A majority of attendees were already tech users but felt they were not getting the most out of their devices due to the familiar story of not having ongoing support systems to either overcome problems or get started on something new.

Plean was also well attended and we had visits from OCN participants and a local craft group. We were also able to promote a number of Library initiatives we have featured in these updates.

In Bannockburn guests included Margaret from the Buttercup Café and a staff member from the Fairview care home (residents could not make it due to the horrendous high winds this time) As a result of the meeting Fairview residents will be going back to the Buttercup Café after losing touch. Everyone attending had a good discussion and lots of connections and joint working was discussed.

All the sessions provided lots of opportunity to raise awareness of dementia in local communities, connect people, develop joint working and raise the profile and the work OCN. The range of people attending and the range of conversations we had meant offered a real opportunity to ‘burst the dementia bubble’ at a very local neighbourhood level.

We had our first partnership meeting at the Bellfield Centre. It was really great to hold the meeting in this space and it felt much more appropriate for OCN. As part of the session volunteer community researchers presented on OCN project analysis and evaluation. This created a stimulating conversation. I distributed an overview of the main project work themes and strands to partners. We then had two breakout sessions one looking at community and communications and one at the development of a digital hub in the Bellfield. Hopefully we can update everyone on the outcomes for these sessions at a later date.

We held a thank you tea party at the Bellfield Centre on 26 March. We had over 70 guests attending consisting of people from the wider community, OCN participants and Bellfield residents. One of the reasons for our tea party was to thank people but also to re connect OCN strand leads with all the participants who have been involved and contributed to OCN over the last year and a half. OCN strand leads and volunteer community researchers mingled with guests, spoke about the different strands, linked with new people who are interested and chatted in a relaxed environment. We had such a positive response and outcomes from this event we are planning on holding regular OCN tea parties and, better still, we have found a fantastic volunteer to lead them. The potential for making connections, share information and developing OCN ideas is massive benefiting both Bellfield Centre, wider community, residents living with dementia and OCN partners through awareness raising, connecting, sign-posting and activity development. Look out for more invites in the near future. Thank you to Nora and the Tilly’s Tea Room Team for their expert catering. 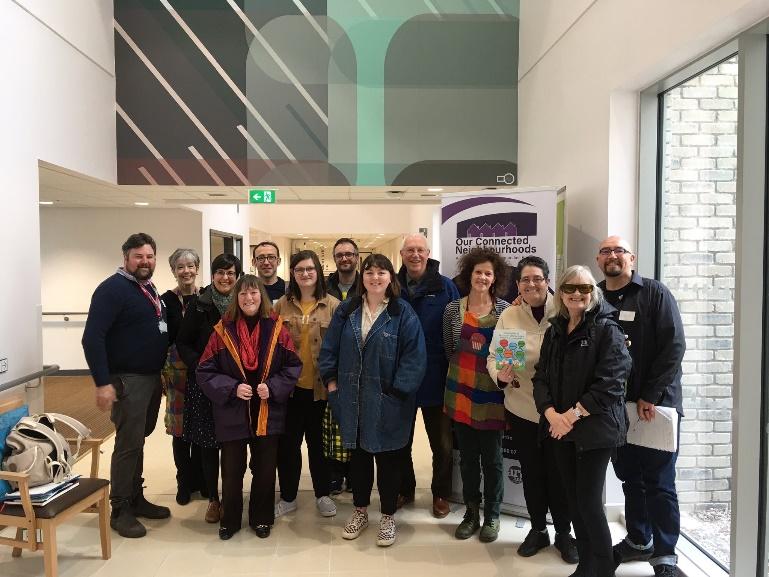 Our volunteer community researchers have been meeting back up with OCN participants and will continue to over the coming months. Participants are suggesting some interesting ideas about different models of volunteer led clusters of local neighbourhood peer support. These models vary from area to area. This is really exciting and we plan that other local neighbourhood groups will be able to duplicate anything created through OCN.